Is there a way to assign the logitech g-keys from my g110 to xpadder?
Top

Timmctg wrote:Is there a way to assign the logitech g-keys from my g110 to xpadder?

Thats the whole idea of Xpadder, to emulate any and I mean any Keyboard and Mouse. Yes thats no problem for Xpadder to do. Its a logitech keyboard and incidentally I own one and is using this to type out this reply
Top

Yea i'm guessing g-keys is a plugin for the keyboard? Which has extra non standard keys. IDK if even it's detectable by Xpadder. I would try clearing the key of macros and then attempt to assign it to the gamepad in Xpadder. If it works you can then reload your macro's and try using them through the gamepad.

I'm more interested to hear if you could map those buttons as a gamepad and use xpadder to generate sequences for your g-keys. (Though it sounds like g-keys is a more sophisticated macro system.) 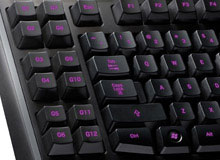 I would say that it's hopeless to assign the G-keys in a Xpadder profile, as Xpadder doesn't send it's input via the keyboard driver but over these Windows programming interfaces (source Jonathan) that most likely doesn't know about any G-keys.


OkeDoke wrote:I'm more interested to hear if you could map those buttons as a gamepad and use xpadder to generate sequences for your g-keys.

Yes, I would be interested in that too. It supposed to be possible with the G13.
Top

If I assign a normal keyboard key to the g-key and try binding it to Xpadder it will recognize the normal key but it wont recognize normal key macros on the g-keys just individual normal keys.
Top
Post Reply
6 posts • Page 1 of 1

Return to “Other questions”